The initial call to the property was for a roof coated in raccoon feces. There were so many raccoons feces that the roof was hard to see through it. Raccoon feces is very dangerous. Raccoon roundworm is one of the most dangerous and untreatable parasites in the world. It is so dangerous that raccoon feces is considered a biohazard and its removal require protective gear. The proper name for the parasite is Baylisascaris procyonis and it is a worm that replicates in raccoon feces. This does not harm raccoons but is fatal to humans. Pets and children of toddler age are most in danger of consuming this parasite but anyone who has touched a surface covered by the eggs of this parasite and who then touches their mouth will be infected.

The initial inspection of the home revealed a massive amount of raccoon feces on the roof of the shed roof. This is more common than many people realize as raccoons often defecate in high places with a personal preference for humans to shed rooves. The dangers are too serious to remove the feces yourself to call a professional. 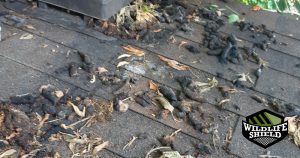 The initial measures taken by the technician included removing the feces and placing it in a bag for removal and disposal at a bio-hazard site. The residue of the feces still contains billions of roundworm eggs so the area must be sterilized with hospital-grade botanical chemical sterilizers and then deodorized to get rid of the smell. 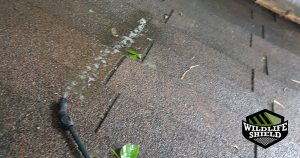 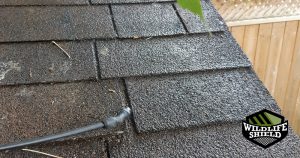 In conclusion, the feces were removed from the shed roof and the danger of raccoon roundworm was averted. The danger now gon the customers feel safe using their shed again.